First a short summary on the events that took place in Banyas then my explanation on the reason why Assad did it.

Assad’s forces announced on May 2 that they were going to enter the neighborhoods, which they already control and which have no FSA whatsoever, to ‘cleanse’ the area from ‘infiltrators’ and ‘armed gangs’. What followed was (and still is happening) a massacre that was documented live as it happened, by not only the Syrian opposition, but by Assad’s forces themselves. Assad State TV was called in to film Assad’s thugs as they entered homes and lead men and boys away to the town square so be executed. Photos and videos were posted on pro-Assad websites showing as much. A day later, videos started to emerge of the dozens upon dozens of women and children who were not taken from their homes, but instead shot, bludgeoned and overwhelmingly butchered in their own homes.

Banyas is a small town in the province of Tartous. It’s a religiously mixed town with both Sunni’s and Alawites and a small number of Christians. Banyas was the first town, after Daraa, to rise up and protest against the Assad regime. The protests only lasted briefly before Assad’s forces violently suppressed them. Since then there have been no protests nor has there ever been any FSA in the town. Tartous is an Assad stronghold and there would be no chance of locals being able to arm themselves.

This massacre, along with a few others (just to mention some names) such as Jdeidat Artouz & Fathel, Daraya, Karam Al Zaeitoun, Qubeir …etc are the first and largest massacres to have taken place on Earth during the Information Age. An age where video, photos and eye-witness accounts are relayed, if not live, very close to the actual event itself.

What follows next is my opinion on why Assad carried out this massacre and many others. I write this in response to many who ask me: “Why would Assad do this?”

Now there is a question many non-Syrians ask. Why? Why would Assad commit this massacre and others? What does he benefit from them? What is his goal?

Assads forces carried out this massacre, and all others for several reasons. I will not ‘debate’ the fact that his forces carried them out, if you don’t believe so, then this post is not for you. The primary reason (for the massacres) is to extinguish the nationwide revolt against him. Each massacre is more hideous than the last one (as hard as it is to imagine). He hopes that ‘this one’ will ‘finally’ terrify people into giving up their quest to free them from his tyrannical bondage. He has bombed the people of Syria with everything he has in his arsenal, from bombs, shells, mortars, ballistic missiles and yes, even chemical weapons (just because the ‘world press’ was not on the ground to inhale the fumes and witness it does not mean it did not happen). He knows that the people of Syria are not scared of bullets or bombs anymore, yet everyone, down to our very bones, is terrified of his massacres. The fashion in which Assad’s forces carry them out defies appropriate words or even historic comparisons, so I will make none. It’s enough to say that any sane Syrian, given the absurd ‘choice’ would rather die in an air-strike than being apprehended, tortured and executed by Assad’s forces. Yet as we have seen, even this systematic genocide has been to no avail. If anything, all of these tactics only strengthen the resolve of the survivors and the people of Syria.

Another reason for the massacres is Assad’s wish, as was made clear from day one, to ignite a hellish scenario of a nationwide sectarian conflict, which, with all that has happened, has yet to take place on any sizable scale. Assad WANTS the opposition, who happen to be mainly Arab Sunnis (due to the fact that Syria is 80% Arab Sunni, not because this revolution is or was labeled as such) to respond to his massacres with retaliatory massacres against Alawite villages. This has not happened yet. And no, the FSA executing soldiers caught in battle, does not constitute or compare to Assad’s forces slitting the throats of baby girls. Any comparison is empty, foolish and without substance. The death of a combatant who chose to murder his own people cannot even begin to be compared to that of a small child. Labeling the executions of Assad’s forces at the hands of the FSA as ‘unjust’ while sitting behind a keyboard in a country with where there is a rule of law shows how little a person who uses that label knows about realities on the ground in Syria. Revolution is not pretty. War is ugly. Assad wanted the latter, not us.

A third reason for Assasd’s continued massacres is that they are a ‘message’ albeit a horrific one, to the international community. The message is ‘come negotiate with me or I will not stop’. Assad has no more cards to play with the international community. He has no ‘state’ anymore. Yes, he still controls a vast and very sectarian militia at this point, this does not constitute a ‘state’ though. His assets are few (to the world, but deadly to Syrians). He has little to offer the rest of the world, no carrot to invite them for a talk. If there is one single thing that scares Assad and keeps him up at night (rest assured, the murder of his people does not), it’s the direct involvement of the international community in Syria on behalf of the opposition. And no, Israeli air-strikes against Assad and Hezbullah targets inside Syria do not constitute this, Israel is striking Assad’s weapon cache’s so the opposition, who are true ‘resistance’ fighters, do not get ahold of such weapons. Assad has never, would never, use his weapons against Israel despite numerous strikes. And again, no, limited involvement by the USA, NATO and the GCC in the form of small, yes I said it, small amounts of arms and cash to the opposition does not even minutely compare to the massive material support Assad is receiving from his foreign backers, Russia, Iran and Hezbullah.

Finally, the last ‘reason’ in my view, is that the massacres are being used as a tool to shift demographics. Many have claimed, and I cannot argue against them, that Assad is creating a mini-state of his own for when the time comes to flee Damascus. The massacres certainly fit this pattern, ‘cleansing’ villages that are mixed and close to his future mini-state. However much this might be true, people forget one key fact, that Assad is a dictator, it’s either all or nothing for him and his like (dictators). ‘Assad or We Burn The Country’ is written on walls across Syria by his forces. Assad will not settle for his own mini-state on the coast. He wants it all, as was literally given to him by his father. A mini-state may not be economically nor logistically or even ethnically feasible, yet this will be Assad’s last resort. People that are familiar with Lattakia and Tartous know what I mean by this. Both provinces are, despite what many claim to be years of Assad favoring all Alawites (which is false, he favored anyone who gave him full obedience) is extremely poor and under-developed. There is a massive lack of basic infrastructure to run an independent state. I say ethnically unfeasible as well since many towns on the coast are religiously mixed. The capital of Lattakia is roughly 50% Sunni alone. However, as we have seen in Banyas over the last few days, this may be the start of a massive ‘cleansing’ of the coast, on a scale whereby in a few months time we may consider the genocide in Banyas to have been small by comparison.

My goal for the above is for those that don’t know, to understand the basics of what the Assad regime is and what it is that we are fighting for … and maybe, possibly, hopefully help us. Trust me, we are humans worth helping and saving. We deserve to live just as much as any person.

On my most recent trip to Syria, the head doctor at a hospital in Idleb, who is the uncle of a martyr, the father of a son locked in Adra prison, the brother of a man locked in Sadnya prison and the brother of an FSA leader, said this to an American journalist in my presence:

The people of Syria started this revolution by asking for simple, non-commital and at best, cosmetic reforms only after generations of terror and horror. Not for the downfall of the regime. It was Assad that fired the first bullet.

Below is a summary of the most recent videos and photos from the massacre in Banyas.

There are 20 people in this room. All are women and children. All are from the same family. You can clearly see mothers hugging their kids. A pregnant woman hugging her child. Sisters embracing eachother. All were butchered where they lay.

A video of some of the victims, many were women and children.

Another video in a home. All the dead are women and children. Children in the fetal position. Mothers executed next to their children.

A video posted by Assad’s forces showing the executions they just completed. They burnt all these bodies as well.

Bodies lay in the streets. Most were butchered.

A family, including women and small children butchered inside their home

They were executed then set alight

More of the dead, most were butchered with knives

A baby girl, killed then burned by Assad’s forces.

A young girl crouching in her home. Shot dead by Assad’s forces.

Massacred children in the streets. 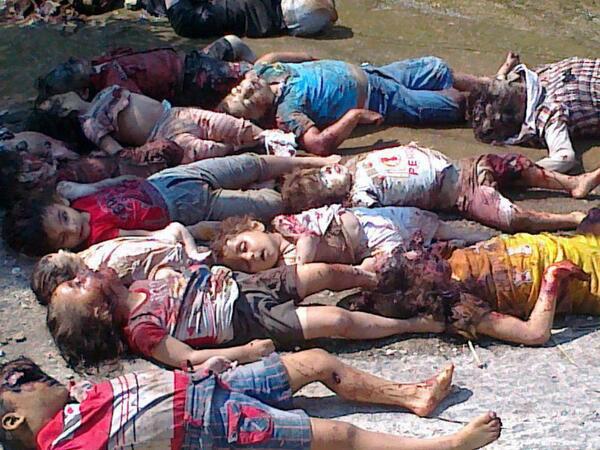 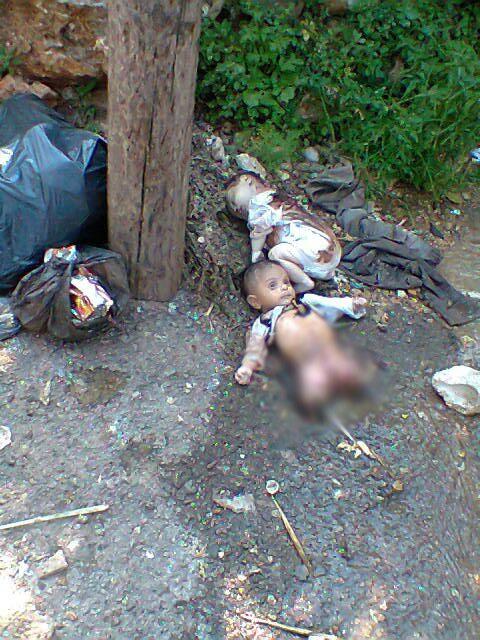 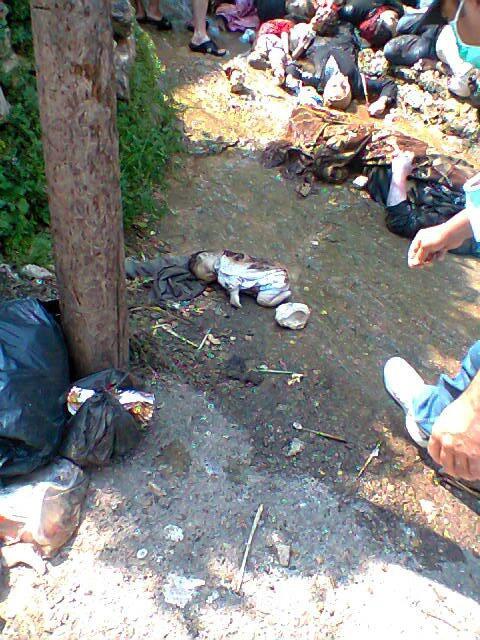 More photos of bodies in the streets

More charred bodies in the street

A young boy executed in the street

More photos of the massacre. As you can see, more children. 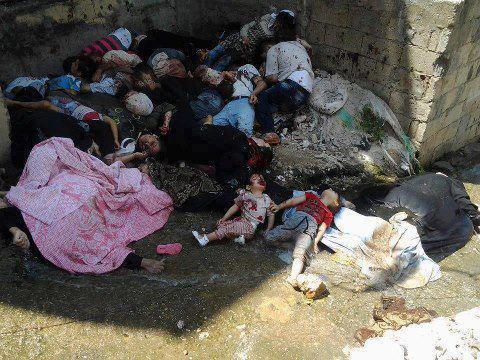 More bodies in the street 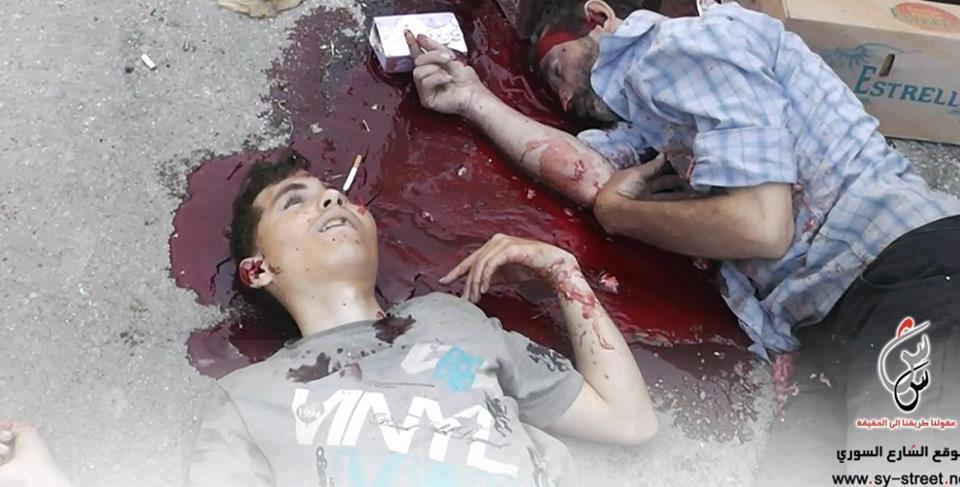