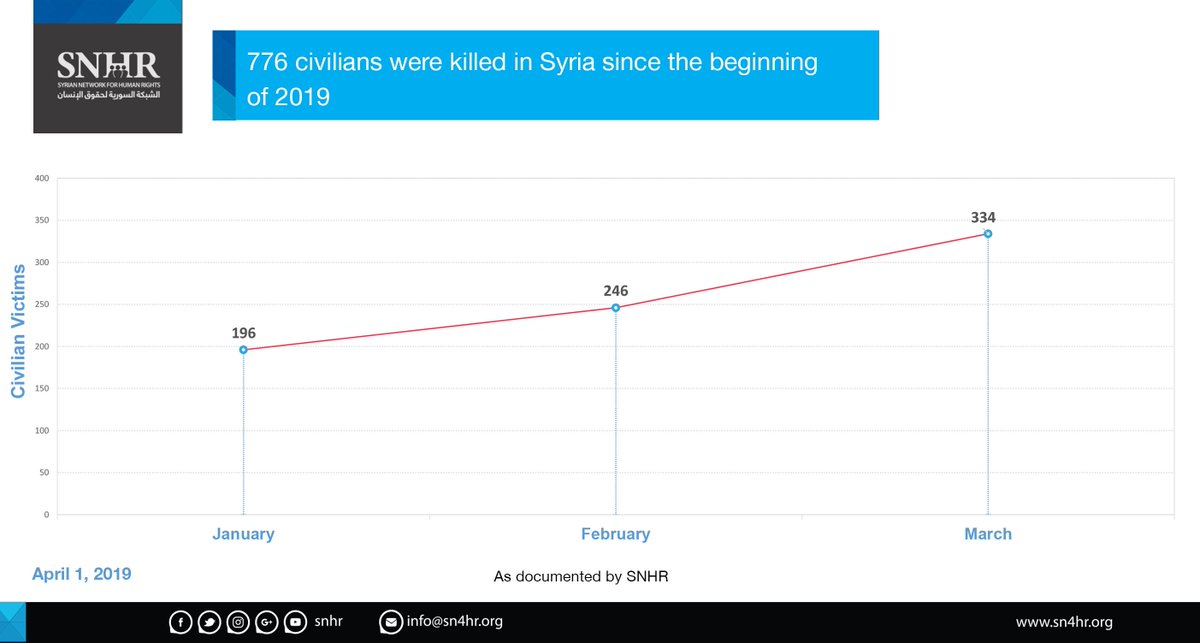 The SNHR announced in its monthly report released today that at least 334 Civilians, including Two media workers and Two Civil Defense personnel, were documented killed in Syria in March 2019, in addition to 30 persons who died due to torture at the hands of the main perpetrator parties to the conflict in Syria.
The 20-page report states that the crime of murder has become widespread and systematic, mainly at the hands of Syrian regime forces and their affiliated militias, adding that the entry of several parties into the Syrian conflict has increased the importance and complexity of documenting the victims killed in Syria.
The report notes that since 2011, the Syrian Network for Human Rights has created complex electronic programs to archive and categorize the victims’ data, enabling the network to catalogue victims according to the gender and location where each was killed, the governorate from which each victim originally came, and the party responsible for the killing, and to make comparisons between these parties, and identify the governorates which lost the largest proportion of residents. The report catalogues the death toll of victims according to the governorate in which they were killed, rather than by the governorate they originally came from

The report includes the distribution of the death toll of victims killed by each of the main perpetrator parties in the Syrian conflict, noting that in regard to joint attacks, when SNHR is unable to definitively assign responsibility for specific attacks to one specific party, as in the case of air strikes by Syrian or Russian warplanes, Syrian-Iranian attacks, or attacks by the Kurdish-led Syrian Democratic Forces and International Coalition forces, we indicate that responsibility for these attacks is held jointly by the parties in question until we are able to establish with a high degree of probability which one of the parties was responsible, or it’s proved that the attack was a joint initiative carried out in coordination between the two parties.

The report draws upon the ongoing daily monitoring of news and developments, and on an extensive network of relations with various sources, in addition to analyzing a large number of photographs and videos.

The report stresses that the Syrian government has violated international humanitarian law and customary law, and all UN Security Council resolutions, particularly resolution 2139, resolution 2042, and resolution 2254, all without any accountability.
The report notes that there is no record of any warnings being issued by the Syrian Regime or Russian forces prior to any attack in accordance with the requirements of international humanitarian law. This has been the case since the beginning of the popular uprising for freedom, providing another blatant demonstration of these forces’ total disregard for the lives of civilians in Syria.

The report calls on the Security Council to take additional steps following its adoption of Resolution 2254, and stresses the importance of referring the Syrian case to the International Criminal Court, adding that all those who are responsible should be held accountable including the Russian regime whose involvement in war crimes has been repeatedly proven.
The report also requests that all relevant United Nations agencies make greater efforts to provide food, medical and humanitarian assistance in areas where fighting has ceased, and in internally displaced persons camps, and to follow up with those States that have pledged voluntary contributions.

The report calls for the implementation of the ‘Responsibility to Protect’ after all political channels have proved fruitless through all agreements, the Cessation of Hostilities statements, and Astana agreements that followed, stressing the need to resort to Chapter VII, and implement the norm of the ‘Responsibility to Protect’, which was established by the United Nations General Assembly.

The report calls on the Independent International Commission of Inquiry (COI) and the International, Impartial, and Independent Mechanism (IIIM) to launch investigations into the cases included in this report and previous reports, and confirms the SNHR’s willingness to cooperate and provide further evidence and data.

The report also calls on the United Nations Special Envoy to Syria to condemn the perpetrators of crimes and massacres and those who were primarily responsible for dooming the de-escalation agreements to failure, to re-sequence the peace process so that it can resume its natural course despite Russia’s attempts to divert and distort it, and to empower the Constitutional Commission prior to the establishment of a transitional government.

The report also stresses that the Syrian regime must stop the indiscriminate shelling and targeting residential areas, hospitals, schools and markets, as well as ending the acts of torture that have caused the deaths of thousands of Syrian citizens in detention centers, and complying with UN Security Council resolutions and customary humanitarian law.

The report also calls on the International Coalition forces to acknowledge that some of their bombing operations have resulted in the deaths of innocent civilians, and demands that the coalition launch serious investigations, as well as compensating and apologizing to the victims and all those affected.

The report stresses that the states supporting the SDF should apply pressure on these forces in order to compel them to cease all of their violations in all the areas and towns under their control, adding that all forms of support, military and all others, should be ceased.

The report calls on the Armed Opposition factions to ensure the protection of civilians in all areas under their control, and urges them to investigate incidents that have resulted in civilian casualties, as well as calling on them to take care to distinguish between civilians and military targets and to cease any indiscriminate attacks.

It is an organized clandestine group consisting of elements from Daesh-linked cells, and most of its elements belong to the organization’s security office in the badiyah.

It was formed from groups after the dissolution of Al-Rikaz (Ore) and the security offices.

It was joined by fighters in the SDF-held areas and some elements who left Al-Baghuz town.

#D24
A video shows the widespread presence of landmines and IEDs in Ash-Shafah town in the eastern #DeirEzzor countryside. pic.twitter.com/iAZwx03fLg