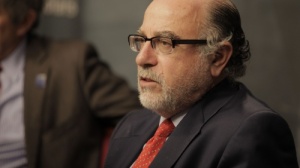 I met Mohamad Chatah in late 2011. I was in Beirut for a couple of weeks, interviewing politicians and civil society members for a research project on bicameralism and consociationalism, and a mutual friend put us in touch. He had been interested in the idea of a Lebanese senate for many years, and so he invited me to meet him at Center House, not far from where he was killed this morning.

Mr. Chatah was a Lebanese economist, minister, ambassador, and senior adviser to the Hariri family. In the course of our discussion, he struck me as curious and flexible in his thinking, a realist uninterested in pie-in-the-sky ideologies. We chatted about the political situation, about blogging, and about my doctoral research, and then moved to a discussion about his ideas on the role a senate might play in Lebanese political life. Some of those ideas informed my working paper on bicameralism for Stanford’s Program in Arab Reform and Democracy (see link above).

Like many other countries, Chatah suggested, Lebanon was caught between an ethic of individualism and communalism. “We don’t have a geography that allows for a federal system. And we also like to think of ourselves as equal individuals in a nation. That is a principle or a value that is well entrenched. At the same time, we are communities… And we’re old enough and wise enough to know that history does not dissolve the lines between communities.”

There was no unitary structure of government, to Chatah’s mind, that could respect individual equality, communal equality, and the importance of communal borders. Political confessionalism, he argued, was an inevitability in Lebanon for the time being, but it could be tamed to make the system function more efficiently and equitably:

I don’t want to get rid of confessionalism; I want to put it in its proper place… There’s no way to remove confessional quotas from the system unless you force it through with some kind of authority. Once you think of political sectarianism as an evil that we should do everything possible to get rid of… I think that’s the wrong way to think about this country. I want to base any system that comes out of this structural reform on certain realities that we are confident of, and I’m confident that these demarcation lines between Sunnis and Shia and Christians and Muslims will be with us for a long time. I don’t want to base the system on an unrealistic world. As desirable as it may be, that’s not something that serves as a model.

If communalism is inevitable, I asked Chatah, why bother with a senate? Why add another layer of bureaucracy to a system that is already choked with inefficiency and sectarian-flavored gridlock? As he himself admitted, Lebanon “is not easy to keep together; the fault lines are an extension of most of the religious and cultural fault lines in the world today.”

Chatah’s interest in a senate, and in structural reform more broadly, was because “the basic tools of democracy are not working now. All of the links between the people, the MPs, the ministers, and their decisions are broken in Lebanon. Cabinets are formed in a way that is not related to the outcome of the elections, and cabinets can’t take decisions even when they’re formed.” A senate, he argued, would provide the necessary communitarian assurances, while giving space to the Parliament to get things done.

The next several days will be full of speculation about who wanted Mohamad Chatah dead. There will be a great deal of tail-chasing commentary about motives and mysteries, “which side benefited most from the assassination” and which side was weakened by it. Was his death a message to President Sleiman and March 14 to drop their campaign for a neutral cabinet? Was it a message from Syria to the international community that it still has the ability to create havoc in Lebanon, in the build-up to the Geneva conference? (The most laughable theory is already in circulation in the press, insinuating that his death was related to something he tweeted about Hizbullah on the morning of his assassination. Why not scan the rest of his Twitter feed for other culprits, from Christmas-hating jihadists to Ziad Rahbani…)

Another very sad day in Beirut. I’d like to express my condolences to Mr. Chatah’s family and friends. May he rest in peace, and may his killers be brought to justice.