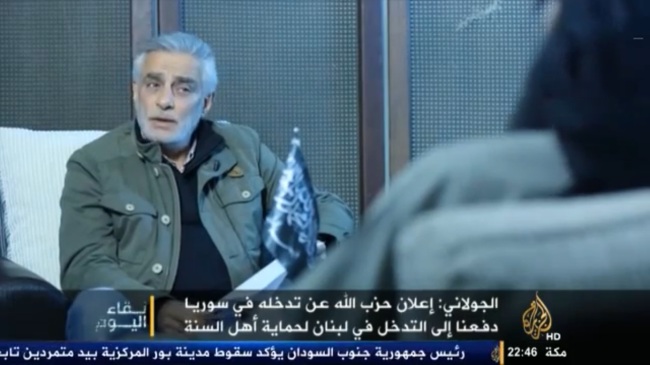 So Tayseer Alouni did it again…

After his famous interview with Oussama Bin Laden, which led him to prison in Spain, Alouni of Aljazeera Arabic got the scoop of interviewing the leader of the Alqaeda-affiliated Jabat Al-Nusra Abou Mohammad Al-Joulani (or less Al-Golani) for the first time on TV. Al-Nusra is one of the military wings fighting in Syria against Bashar Al-Assad’s regime with an aim to establish the Islamic Caliphate and the law of Sharia after the fall of the regime.

The interview was aired in full (51 minutes) on Aljazeera two days ago.

Turning his back to the camera without showing his face but bits of his black head-scarf, he spoke formal Arabic with a similar voice tone to the previously published ones on YouTube (despite being disguised then). I got the impression from his voice that he is quite young, may be in the region of 35 – 40 years old.

He didn’t seem to have dark skin, mostly from his left hand which he used often for gestures (we can’t see the other one). He wore what seemed like a watch in his left hand. Now you might think this is not important, but actually it is as there are lots of fatwas and Islamic scholars’ opinions on whether a watch needs to be worn in the left or the right hand (sorry, not getting into this now).

Tayseer Alouni was not challenging enough. He gave him an easy ride with the bulk of the time to say what he wanted. He didn’t question him on his logistical supplies, dispute with the other AlQaeda wings in Syria (ISIS), contrarian beliefs, sectarian ideology and terms used in their literature, knowing Al-Joulani confirmed in the interview that the struggle is sectarian with the Shias and Alawites. Alouni did ask him though on executing infidels (Kufar) which Al-Joulani replied that they don’t do it – but they leave these matters to their judges and knowledgeable scholars (i.e. they do it in style).

Al-Joulani didn’t specifically clarify on what will happen to any non-Sunni sects in Syria after the fall of the regime; he said that minorities always existed under Islam before and they basically will find a way. Moreover, he stated that each sect will studied on a case by case basis (which is…really worrying).

Al-Nusra leader seemed to be trying to be different than The Islamic State of Sham and Iraq (ISIS) which would have said they would abolish the current borders of the Syrian state, as their name suggests too. On the face of it, Al-Nusra looks like a ‘Syrian militia’ rather than a foreign force.

The timing of recording the interview seemed recent as the nuclear Iran-US deal was mentioned in the interview (I think it was the only recent event?). Why now? May be Al-Joulani can get more ground sympathy with the serious competition from the other AlQaeda win The Islamic State of Sham and Iraq (ISIS). He also simply confirms his presence after the previous rumours of being killed, or even non-existant.

Both Alouni and Al-Joulani referred to AlQaeda leader Ayman Al-Zawahiri as ‘Doctor’, not Sheikh, but Al-Joulani followed it with ‘God protect him’.

The Interview. Here are few main snippets of what Al-Joulani said:

He saw his fight as part of a long history of Jihad which started with Prophet Mohammad. In his talk about Afghanistan, he implied that it was the main theatre for Jihad which housed the Egyptian and Syrian Jihads which were exported back to Iraq. He also said he fought in Iraq at the time with the AlQaeda branch over there.

Al-Joulani clearly stated that the Syrian revolution which started in March 2011 giving them the opportunity to organise themselves and start operating. He said they started with seven or eight men in August 2011 with the first operation(s) in December 2011. They announced themselves on YouTube in January 2012; Lebanon Spring blog published it at the time. He didn’t say where they started in Syria, but gave the impression they were spread in many locations, striking the regime in many hard-hitting locations.

He seemed very confident about the supporting popular environment. He said that a new Syrian Islamic society is being born totally different from the previous one. He also talked about the different medical and food supplies they offer the residents.

He said he doesn’t want Al-Nusra to monopolise the political rule in a post-Assad era, but he will work hard to establish an Islamic rule.

He mentioned the mantra about how the Sunni Gulf states are in danger from The Shiite Iran state.

Understandably, he stated he was very happy when Hezbollah announced publically its military presence in Syria, because this allowed Hezbollah to be a fair game for AlQaeda, giving them the excuse to enter Lebanon. He called Hezbollah’s admittance to fight in Syria to be a ‘political stupidity’.

Ah well, It seems the current Syrian war has allowed the AlQaeda ideology to be a mainstream one like never before. And at last, the Sunni peer of Hezbollah exists, with a Levantine armed takfiri wing(s).

Keep the doors of hell (or heaven?) wide open…