On December 15th, representatives of the Syrian opposition’s revolutionary and military council commands issued a statement announcing the formation of the Supreme Military Council, the military wing of the Syrian Opposition Coalition and the future SOC-led transitional government. All officials of the Council–major and subordinate, military and civilian–were elected to their positions by a 261-member body known as the Revolutionary Force Authority.

The Council is structured to represent each of Syria’s five different battle fronts (Northern, Southern, Eastern, Western/Central, and Homs). The Council is led by Commander-in-Chief Salim Idriss. To support and advise his efforts, five military deputies and five civilian assistant deputies were appointed to head each of the five specific battle fronts. Each team of deputies from each front are assisted by five sub-councils, each serving a different function (Operations, Intelligence, Supplies and Equipment, Administrative and Finance, and Transitional Justice). In addition to these sub-councils, each front has two subcommittees (Armament and Financial).

The diagram below represents Syrian Support Group’s understanding of the final structure of the Supreme Military Council. 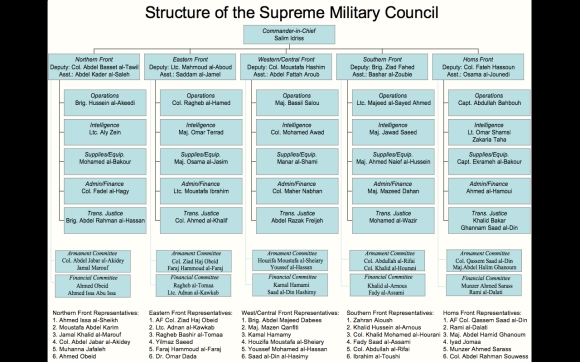